I was looking thru design sponge and found a neeto little link.

The first thing that caught my eye, was the poster, and the note that she was an Austin based illustrator. I thought that was cool. Then the writer mentioned and she didn't know how much stuff she already knew of Divya's work since it's been featured everywhere. That made me curious and what do you know. I have seen her work before.

She is the reason, along with the song, that I fell in love with the band Spoon in 2001. I was in college and was watching a video that was playing on tv on some Austin based show.

It was everything hits at once.

Take a look at it.

Then, I was thinking about at that time the video made me think of this little movie I had a seen called Waking Life, by Richard Linklater. And lo and behold, she had worked on that too.

Here's some other illustration work. He looks so put out. I guess I would be too if I were trying to talk on a pay-phone while holding a guitar. 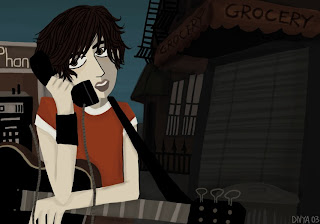 
Apparently, she's been working on most of the things that have influenced me. So, good work Divya I really like your work.
Ruth


ps. Looking at the Spoon video again really makes me want to tune my ipod to my spoon mixes and remember being young.
Posted by Ruth at 7:39 PM