The past two years I've found it very hard to blog. Maybe it was my son going to school. Or maybe it was the motivation was never there anymore. Any moments I spent were mostly being sucked into my phone complacently surfing the web. Oh my gosh, Pinterest pretty much had every spare moment not being a Mom, or doing stuff, was on my couch while my kids watched way too much T.V.

I somehow managed to do quite a lot of stuff, but never felt the need to post about it. But, today, its raining, and I've somehow exhausted the internet. So, I'm posting some thing I had just finished. Well, rather the craftsmen finished the project, I just gave it to them to do. Note to all you out there, it's ok to let a professional do the hard work. Seriously, it will be better and cheaper than trying do somethings all by yourself.

So, this stained glass had been wandering out various households. 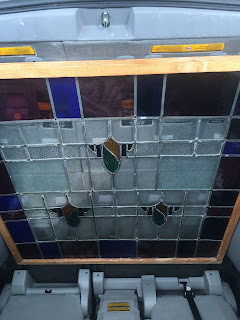 It was originally three antique transom pieces that had been re-worked to one large piece to cover a bathroom window. The stained glass people didn't do an amazing job. There was no re-bar to support the very heavy piece and after 20 years it was sagging and falling apart. Not to mention the color choices were a bit weird. So it had been in my sisters house, then my Mother's house. After my Mom moved, there was no other place for it to go. It was in the garage and I decided I would try to use it in my bathroom window. The huge 4'x4' window was naked save for blinds that let very little light in. But alas, there was no apparently studs to hold the 50 pound piece. So, it stayed behind my dresser, mostly peeking out, and it irritated me that I couldn't use it. The colors chosen were weird, my sister said the stained glass guy she used for some reason chose blue when there was no blue in the original piece and she was a bit miffed. I researched stained glass repair and reworking and it was so complicated with a huge amount of tools I just didn't feel I could tackle it myself. I had wanted to separate the three original pieces and hang them separately. So finally after 6 months of staring, I got my butt in gear and looked for some professionals. I found a stained glass shop a few miles from me, whose sign I drive by almost daily. I never thought to actually see if they were in business until now. Well, they were.


I called and asked if they did repair and refashioning on old stained glass. Jack, the owner said yes and I dragged the large and wobbly and falling apart piece and managed  to put it in my minivan. (Thank god for minivans ;) I drove it over, showed it to him and he was pretty surprised I was able to manage it into my van given the state of disrepair it was in. And not break it I guess. After talking it over with my Mom and my sister it looked like I could go ahead and have Jack and his team to fix it. The price was better than I was expecting for the labor. So I came up with the mock-ups of how I wanted them to look finished.


I went with option 3, with green and white borders added new to match the green in the shields.

In about 3 weeks, Jack gave me a call and said he had finished.


The final resting place of these pieces was my Mothers kitchen. She had three big windows that needed a little excitement. 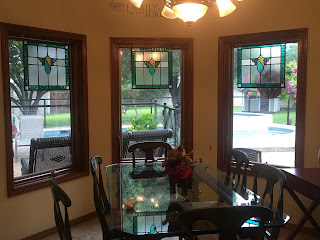 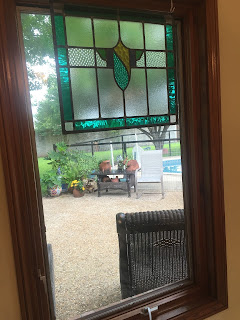 The added border goes perfectly with the decor in her house, and adds some excitement to her kitchen. It made a perfect mothers day gift, albeit, a few weeks after Mothers day. Thanks to all my sisters and brothers that helped pay for it, and a big thank you to Whitworth stained glass for creating it.