TLDR: Make Pokemon themed birthday stuff DIY for cheap from stuff you already have around the house. 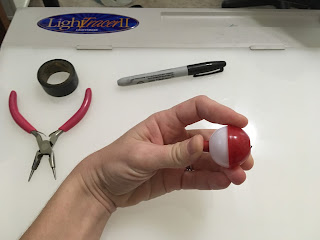 1.Cut off the bobber hook. (use wire cutters, not your fabric scissors.)
Push the red (sticky outy thing) like you were going to wrap the fishing line around the hook. 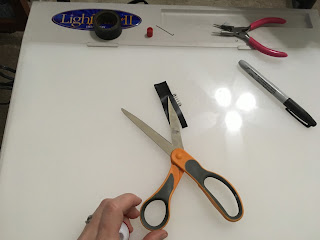 Cut some black electrical tape, you can cut the strip narrower for the size ball you have. 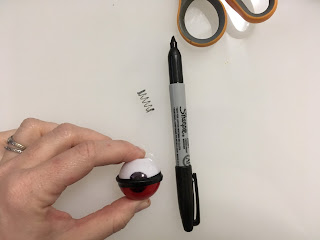 Color a circle with a sharpie. on the center of the ball, overlapping the black tape. 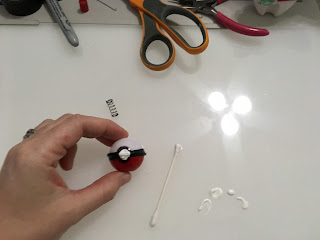 Dap a little white paint on the black circle with a q-tip.

All directions together:
1.Cut off the bobber hook. (use wire cutters, not your fabric scissors.)
Push the red (sticky outy thing) like you were going to wrap the fishing line around the hook.
2. Wrap black electrical tape around the center.
3. Use a sharpie to color in a circle of black.
4. Dab a bit of white paint in the middle.

Voila, you have a poke-ball favor.
Repeat as much as you like. 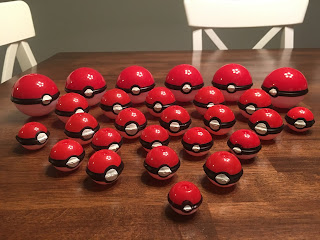 Gotta catch them all. I found, that although the electrical tape gives a nice line, it falls off. So, if you were inclined, you could use the sharpie to follow the seam on the bobber, and eliminate the black electrical tape completely. Or use black duck-tape (they have narrower rolls) to keep the tape from coming off. Or let me know if you find a better black tape.

NOTE: I used these as favors, as in a game called, "Gotta catch them all!" Its a modified pin the tail on the donkey. Instead of spinning and pinning the tail blindfolded. I gave each kid 5 Pokéballs (that I made) I spun them around, and then had them throw the ball at five different Pokèmon posters. If they hit a Pokemon they got a piece of candy. It was fun, but we did it outside (because some seven year old's have some serious pitching arms) and the Pokéballs started to shatter after they hit the concrete.

You could try painting some wiffle balls, or some ping pong balls, or hey, even rubber bounce balls.

Here I'm starting to paint some posters of Pokémon to use for the party. 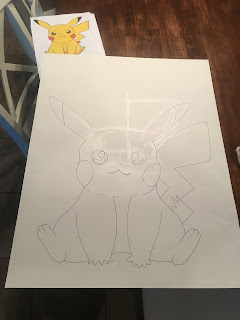 Pikáchu, I printed out some pics, and just drew a grid on the print out. I drew a corresponding grid on my posters and started to paint.

Note, painting with poster paint is horrible. Just get the craft acrylic paint. And don't try to mix your paint. Especially if you have no palette knife, no palette, and there's a $1 bottle of premixed paint the perfect color at an art store. This isn't painting class guys. 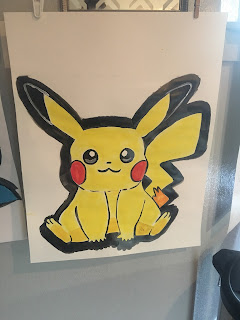 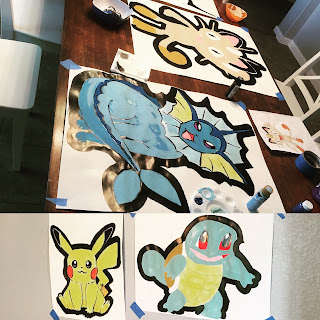 This was a much more time consuming project than I expected. And more frustrating since my kids BEGGED to help. And then I had to FINISH their work. Or really, re-paint it. 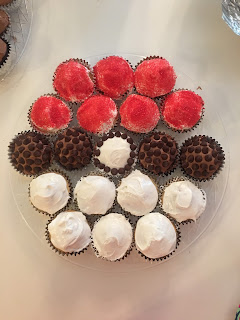 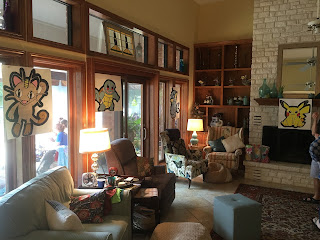 It was a smashing success. Everybody had a great time. And I was exhausted!!!

My daughter Goose loves Mermaids. SHE LOVES THEM!! She's three and knows almost all the words to "Part of your world." I had some ruffled fabric that I had bought and only tried to sew on "ONCE". Because it was a mess to sew. It's this stuff.

While looking for mermaid tails and blankets on Pinterest. (I know;}) i found this really cool pin.

I did my best to follow her instructions but messed up....a lot. I realized how much I didn't know about knits. About my serger, About everything!!! Good lord if I only had read the dang sewing machine directions I would have avoided so much stress and frustration!!!

So, after a lot of trial and error, a few ball point needles and what felt LIKE HOURS on my serger. I made one. And it was awful!!. Tucks everywhere, the size was only tiny.  TO small for Goose. I had to completely removed the ruffled fabric and just go with the blue knit. Which was a cheap jersey that split and laddered constantly. So.....

The first had to go to my littlest niece, S. It wouldn't fit my goose.

Armed with the experience of my miserable first draft , I started again. Determined to make more for my other nieces. And another for Goose.

I think I might make more...one day. Maybe later on in the future. When I can forget how frustrating it was with the first one.


Do you remember when I made those mirrors with frosting spray and dorm mirrors? Well, before I did that I wanted to add something to my kitchen walls. My kitchen is dark. Dark cabinets, dark counter top, very little natural light and just can lights for the ceiling. I tried everything to lighten it up as I was FORBIDDEN to paint the cabinets. (sarge...... and his opinions. ) I painted the walls, several times, I added under cabinet lighting, I added a bead-board backsplash to cover the ugly brown tile. I tried to add light wherever I can.


I thought, Hey, how about something like this? It's not too dark and might actually lighten up the space. 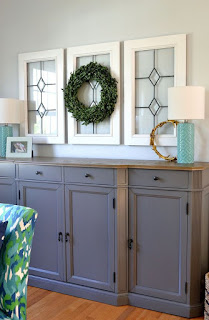 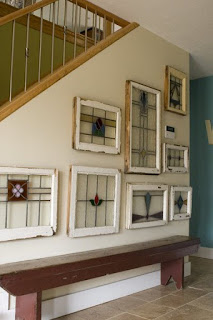 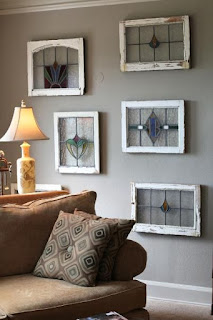 Last year I started a project based on these leaded glass mirrors.


I couldn't afford the hefty price tag and started coming up with ideas. Click below to look at my stained glass inspiration.


So before I did the above, I tried something else.


Now, I couldn't find any mirrors I or stained glass  I could afford, and to do my own mirrors,  I thought might look too "homemade".

Lets give some context. So, back in art school, I was on a study abroad program. It's focus was on drawing and painting. Specifically watercolor. I was fascinated by these old churches, the exquisite iconography and the stained glass. My final project was a horrible ink stained triptych of the stained glass and wood carved pieces in these old Swiss churches.

I don't have pictures which is good because looking back..I'm not terribly happy with them. But that's the thing about art, you get better. I lost them awhile ago anyway. So I started thinking , hey, I know watercolor (spoiler: I was wrong) why don't I draw some beautiful stained glass, and just color it in? Based on the stained glass gallery I made in Pinterest. 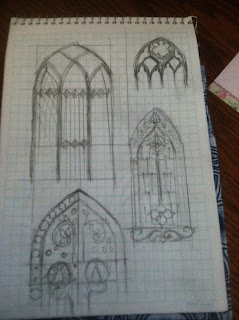 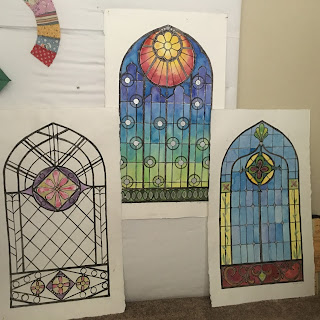 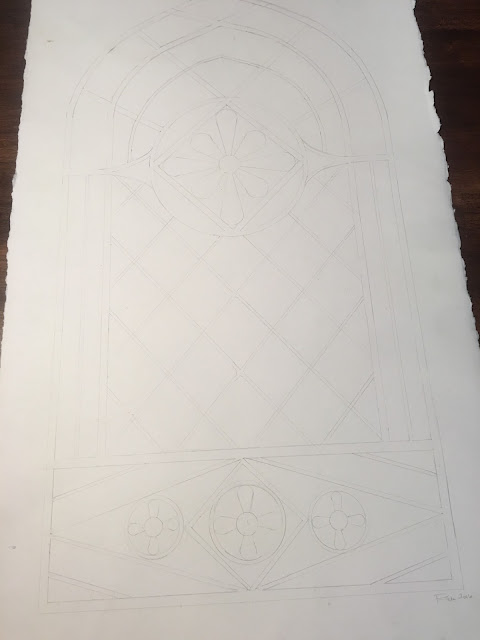 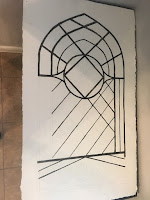 I have stopped doing the stained glass triptych again. I just struggle so much with the color. Watercolor is the easiest the learn, the hardest to master.

Ps. I cannot for the life of me get all these pictures aligned. I have tried everything. Except changing the HTML code. Because no thanks.

My Mother has an adorable playhouse in her backyard. The kids love to play there, in particular my daughter Goose. We had bought a play-kitchen to put in there. And it was great, however during a rainy may, we brought it from the playhouse for the kids to play on inside. It's stayed there forever since. I still loved the playhouse and wanted it to be perfect! Which is to say, I'm reliving my childhood through my kids. :)

I had found a really cool pin on Pinterest and thought, "Hey, I can do that!"
Which I always do, and I'm always wrong.

Here's the blog that posted an easy DIY play-kitchen. 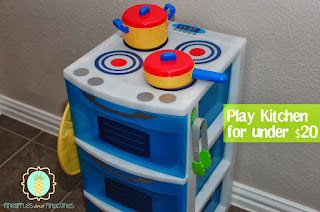 I have some plastic drawers that were barely used. And thought, "I bet I can do that for cheap too!"   Spoiler alert, I was wrong.
I was going to buy the cricut vinyl she had used, even with no cricut but thought  maybe I could find something around the house. See, the thing is, paint wont work well on this plastic. And it was going in the playhouse, which in Texas, is almost always very hot. So, It needed to be sturdy, and not fall off, or flake in the heat.

I found some old plastic folders in my office. I started to cut out shapes and I thought superglue would work to stick them on. 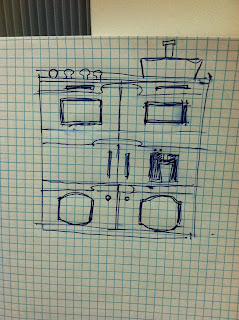 My original idea for the drawers. 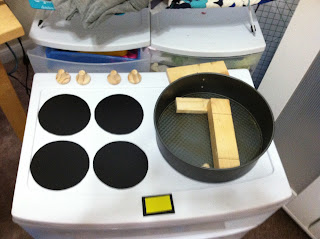 In process. I had some leftover wood knobs from a piece of furniture. Some leftover pieces of wood. And an old springform pan I never used. 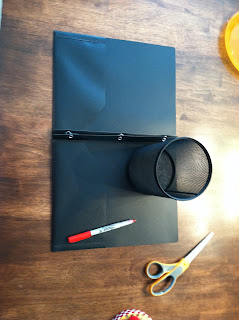 Cutting out some pieces. 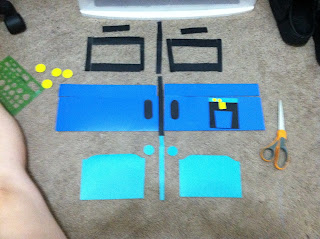 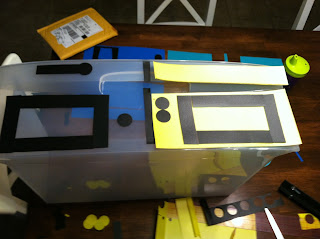 Gluing.
Well, after waiting for both craft glue, super glue and others to see if they would work. I noticed that none of them did. I needed a glue specifically for plastic. The very slick kind of PVC plastic. Which no matter where I went; Home depot, walmart, Joann, was never there. I found some epoxy for plastic, that had a horrible beige color. And said, Nope. So I thought, hell, I guess I do have to spend some cash. I went to Joann's to get some of the cricut vinyl. It was only $6.99 a roll. So $14.00 ain't bad. But then I saw duck tape. They had 8"x11" sheets of it. And a slew of rolls of colors. The sheets were $1.99-$2.99 a piece, I bought six. A roll of duck tape was $5.97. A small thing of acrylic silver paint for the knobs and the wood faucet for $2.99. I bought a plastic bowl with was about$5. Which because I'm horrible at math, came out to $27.92.  I had the drawers and the knobs and the wood. But the drawers if you bought them new would be $17.99.
So, if you bought these things new, this set would cost $45.94 to make. Ugh. So, later, I remembered that the kitchen set  I had gotten for Goose was less than $50. So much for a cheap DIY.  For me, I made the kitchen for $27. But I found a few online pre-made for about $30. They were on sale, but still. Well, I had already sunk some cash into this project I was determined to finish it!! 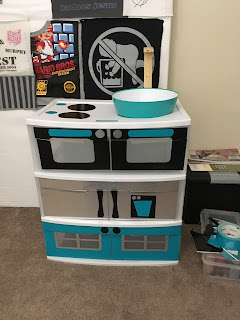 With duck tape sheets and a roll of duck tape. Faucet unpainted, and bowl not glued in. 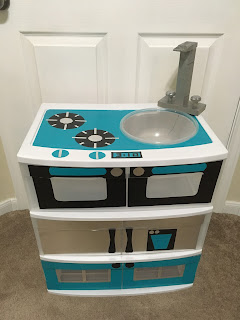 Faucet painted, more duck tape added, and changed out the bowl for one I already had. I had to screw in the faucet, because the glue wouldn't work. Neither would command strips. And the bowl even after gluing a thousand times, wouldn't stick either. I just left it. I mean, whatever. (sigh) 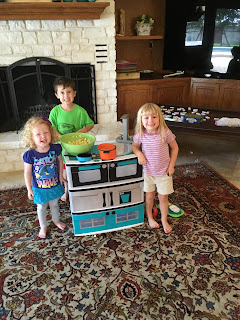 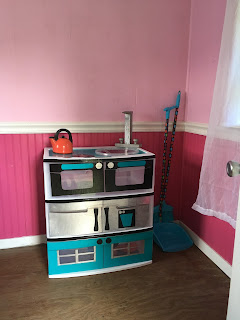 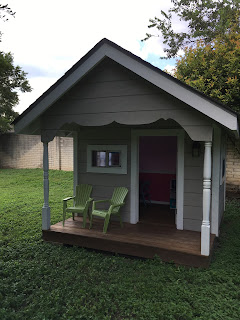 The absolutely adorable playhouse in the yard. Those cute plastic kids size adirondack chairs were $12.00 a piece at Lowes. 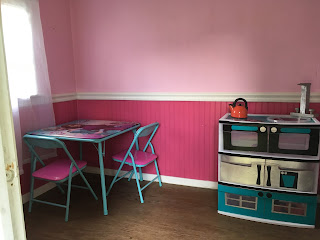 The frozen table and chairs I had gotten a year ago for about $25.

So that's part of my plan to make-over the playhouse. The other part is re-painting the walls, since they got filthy and covered in mildew over the hot and occasionally wet summer. We left the windows open since It was so hot and forgot to close them. (yeesh) My hubbie power-washed the inside and out but still couldn't get off all the grime and mildew.

Oh yeah, I also have to fix that broken window. Plans plans plans. I sure do have a bunch.

Till next time, Rudy