My internet is broken. I am trying to get a new internet provider to well, provide internet since Virgin mobile Broadband decided to stop working after 6 months. So, I'm presently at another person's house, using their wifi to blog. I'm also supposed to be working on my finals and final assignments. But I thought I'd give a reason as to why I've been gone.

In the meantime, you should check out Pinterest. It is my new addiction.

It's like my blog but so much easier to update. It's just a mobile bulletin board that you can use, and look at other's boards as well. I love it soooo much. I never really got on the whole angry birds, youtube, app bandwagon after getting an iphone. But Pinterest, this I really enjoy.

I want these shoes. Not for my daughter because I don't have a daughter, I have a son. But for myself. I wish Ivory and Moss would make them for adults. Or children with adult size feet. 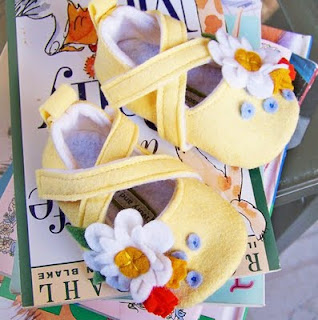 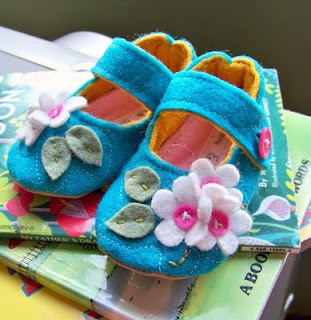 Perhaps I'll put in a request.
Posted by Ruth at 6:53 AM No comments:


Jemma Salume-I Heart You.
Thanks to drawn for posting her awesome work.
Posted by Ruth at 6:34 AM 1 comment:

Here's another illustration for my lullaby book.


I didn't always think of this song as a lullaby, but more of spiritual hymn. But, I had looked for lullaby's on the internet and one person mentioned it. It seemed soothing and appropriate and I always like it. So now it's in my little list of lullaby's.

I know the song mentions angels and not Pegasus', but hey, I got a chariot in there, and who's gonna pull in a sky chariot other than a Pegasus? Think about it? Eight flying reindeer? I'd prefer a Pegasus.

By saving this illustration to be viewed quickly on the web I had to save it as a lower quality, which is why the comet is dithered. I will post a jpeg, but it will load slow. Scroll down to see my original sketch.

So, that's the most recent illustration for my Lullaby book, a book I'm making for my son, and my nieces and nephews, (and for myself) so we can sing together and hopefully, remember these lullaby's.
Ruth

Artists and Illustrators of whom I am extremely jealous-Phil Noto

I wish, that one day, I could be as talented as Phil Noto.

I am, as always in awe. I really recommend you follow his tumblr feed.


Phil's work makes me feel like I should go back to Art School.
Ruth

Here's the newest illustration for my Lullaby Book.

Here's the finished version of Rock-a-bye Baby. I'm not sure I love it yet. I feel like more needs to be done. But that's how I feel about most of my projects. Also, that little cradle just looks wrong. I need to tweak it some.


So now, I finally, after a week off, did the illustration. I hope you like it. I changed the words some, because one, I don't like the idea of an infant falling from a tree, and two because it's my illustration. I can't find who wrote the dang thing, mostly because I haven't looked enough yet. Maybe they'd be irritated, or not. But the words I showed are the words I sing to my son.
Ruthie

I just yesterday finished a project I had been working on for a bit of time. My sister-in-law asked me to make a weighted blanket for her daughters birthday present. I had no real idea of what a weighted blanket was or what it would do. I assumed it was a blanket with some sort of weights in the edges to keep it always looking nice on a bed. So I asked started researching. Well, a weighted blanket is a Occupational Therapy tool for a variety of needs. Some of them are used for adults and elderly who have trouble keeping calm, falling asleep or who need some comfort. The weights are calming, I guess like being held. It's used for children who have ADD, autism, or just restlessness and trouble sleeping. So, I figured, hey, it's a new challenge I'll give it a shot. The beads that are used in weighted blankets are usually polystyrene beads, used in dolls or other fabric toys that need some bulk and stiffness, but also need the ability to move. I ordered ten pounds since the quilt I was making needed to be 6. Size for these blankets are varied depending on the size of the person using it. They also make weighted vests for walking around.

I ordered some very soft yellow minky fabric and tried to come up with how to make it on my own. I found out after I had been halfway through, that there was a much easier way to do this quilt, but alas, my research wasn't very thorough and I really suffered through a much more complicated way at first.

Here's some great info on weighted blankets and a tutorial on how to make one by Craft Nectar. It also has a downloadable pdf pattern that would have kept me from pulling out my hair if only I had found it at first.

The idea was to make an inner layer that held all the beads in 4'x4' squares, to distribute the weight evenly, and then put a soft minky layer, and a satin layer outside it, like a duvet and sew them all together. Here's the beginning of the inner bead layer. 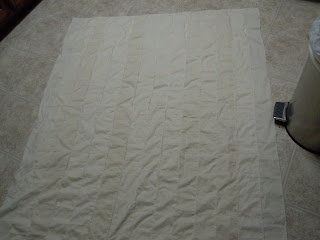 I sewed several strips onto another layer of fabric to make the pouches to hold the beads. I sewed them on one side only, and then began to sew perpendicularly to those stitches to create a grid pattern. 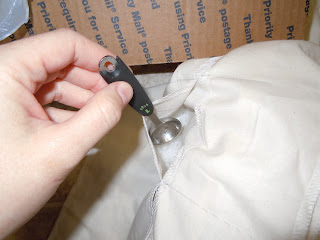 I began to parcel up the beads per pouch. I did the math and found out that four teaspoons of beads would create the right amount per pouch that would create a 6 pound blanket. 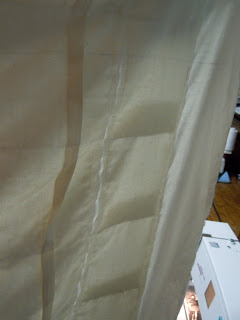 Here's a photo of the beads after they were sewn in to the pouches. 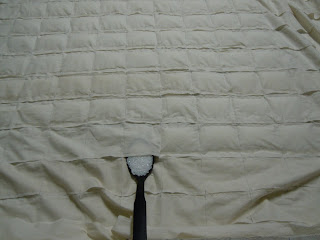 I started to glue the sides together after sewing them proved to be disastrous. (broken needles, half filled pouches and a lot of strain and irritation.) After I filled and glued the pouches I waited for them to dry and then sewed them together. I did make a mistake when I tried to use a larger spoon to put the beads in the pouches, I put four teaspoons in the large spoon and the put it in the pouch, after  awhile I estimated how much four teaspoons would be and ended up putting in too many. The quilt became 10 pounds as opposed to 6. It was a bear to sew this thing. The weight was always pulling the quilt off my sewing machine. I sewed thru the bead breaking my needles, and beads, oh the beads ended up everywhere. My house is covered in them. My husband joked that I should have just bought another ten pounds  and just poured them on the floor, since that's what happened anyway. I don't think I will make another one of these quilts, so I really hope this one does the trick. 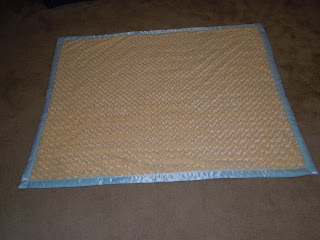 Here it is finished. It's HEAVY. My husband and I tried in on and it's comfortable and calming, my son hated it. So perhaps there's something to all this after all? 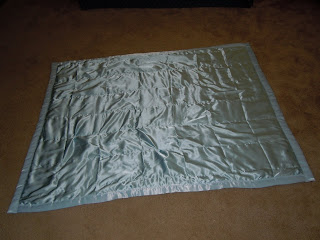 Here's the back side in the satin. I had to sew the inner layer in to the satin backing to stabilize it. 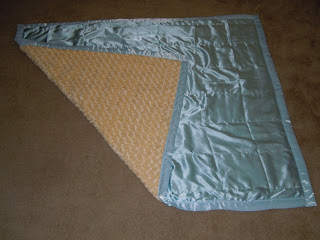 It's comfy, and the fabrics feel great. But, a word to the wise, if you want to make one of these, do you research, go to Craft Nectar and create the quilt their way, don't do it my way, and take your time and remember it's messy. But, the outcome is great, and if it's what you or your child needs, it's worth it.

You can also buy these quilts ready made, they can go from $100 to $400 depending on size and style. I spend about $80-$100 on materials on this one. So, it may not be cheaper if you choose to make a quilt out of nicer fabric than you can get readymade on the other quilts. Minky is expensive but oh, it is heavenly to touch. It was a good experience for me and I hope it's as satisfying to use as it was to finally finish.

Now onto the lady bug project and back to my lullaby book project. I took a week off during a final for my creating web pages class. I'd show you the final web page that I coded in HTML but it's heinous looking. I am very much a beginner.

Oh well, I guess you can see it. Just don't judge.