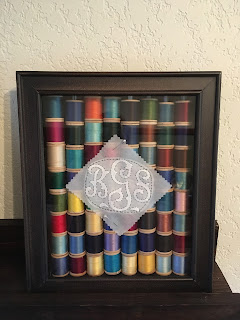 This is a small project I did for my mother.  I was going through all her threads (three drawers full) and trying to organize. Well, the last drawer had these antique spools of thread, with wooden spools. My mother told me that they had been her Mothers. So I grabbed as many as I could and brainstormed an idea. 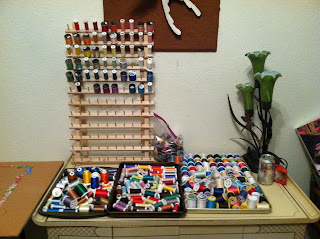 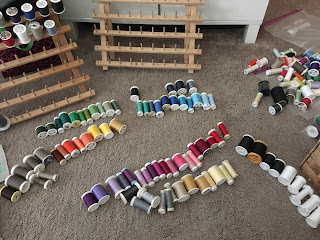 I was thinking a shadowbox of some kind.  So I went through my fabric to find something of Nanny's (My grandmother) I had so many sets of hand embroidered napkins and placemats. I haven't used them because they are antique silk organdy, and they are beautifully made. I couldn't bear to cut them up for something. So for years they've stayed in my cabinet. But I figured, this is what I have them for.

I cut out a small piece that had her monogram. B.S.G.

I used some of the antique threads, and hand stitched around the monogram to make it stand out. In my Mother's favorite color-green.  I wasn't sure how to keep the spools of thread from falling over. I wanted to make sure they were still usable. So, I thought I would use wooden skewers. But alas, I had none. So then, LIGHTBULB, I found some straws. Yes, striped soda straws for drinks. They were too short to fit in to the shadow box, so I put one inside another until it was long enough. Then I just threaded each wooden spool on the straw until it fit in to the shadow box. The straws were sturdy enough to stand up in it. I spent some time organizing the spools until they were a nice assortment. Then I just took some straight pins and pinned on the monogram. 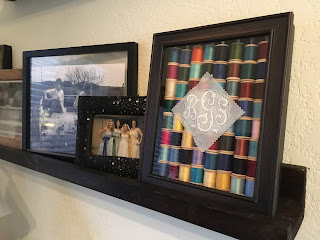 Here it is on her gallery shelves.
, Ruth 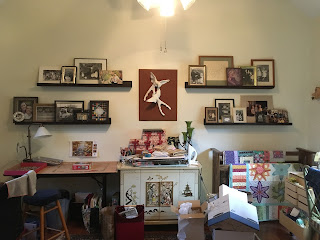