Bra's for a Cause

My sister-n-law Kendra, asked me to work on a BRA for "Bra's for a Cause" event sponsored by the Women's Council of Realtors Hill Country division.  It's a charity that helps cancer victims who are undergoing treatment. It raises money for the Pink Heals Organization and the Central Texas Medical Center Cancer Fund. It donates money to help actual people suffering with cancer. They help pay bills, groceries, they pay for treatments in the hospital thru the cancer fund. They give cash to those who need help. It's a great cause that helps real people going thru this struggle. The idea is to have Firemen, strut down the runway, in beautiful lovingly designed bras, and then auction of the bra. It's a great and fun time, and I designed the bra that Independence Title Company was sponsoring. Each bra was done in support and in memory of a person going thru breast/reproductive and other cancers in the Hill country Area.

Here's some pictures of the last years Bra's for a Cause event. 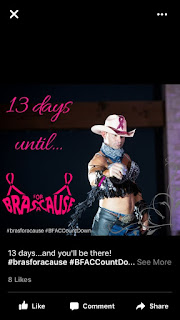 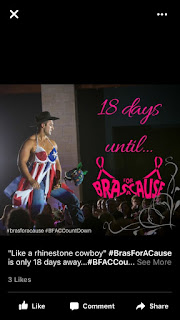 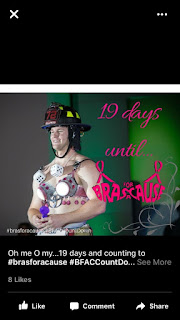 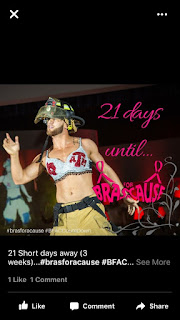 I mean, I really had to step up my game to complete with the awesome creations that had been made. The person that was being sponsored was Ruth, a lovely lady who had gone thru breast cancer treatment 15 years ago, and now again is going through another after being in remission for so many years. She is a lovely woman, who was a hard worker, a constant positive person, and a fantastic Poker Player. The idea was the have a Poker themed bra. K handed me four stacks of poker chips and a 42D bra and said...."Have fun."

And then I did.

I thought that Poker reminded me of Vegas and what is more fabulous than Vegas Showgirls??? So I got a few decks of cards, some ribbons, a fireman's helmet, some feathers and more rhinestones than I can count and started on some ideas.
I wanted to use the poker chips and cards as long fringes, and create a huge showgirl headpiece to adorn the kind fireman who would wear it.

I glued the poker chips to ribbon, and then punched holes in the cards, and glued those on too. I used poker chips glued onto the bra, and then added rhinestone's to the center of each. The cards were added to the fireman's helmut, as well as feathers, rhinestones, and a huge Ace of Spades. And of course, red fringe tassels over the nipples of the bra. 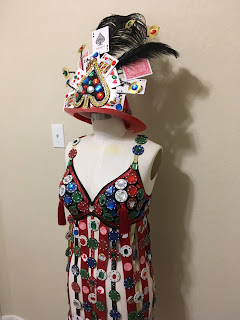 Here were some of the other firemen during their Catwalk. 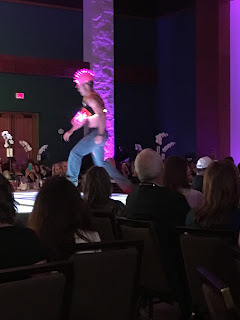 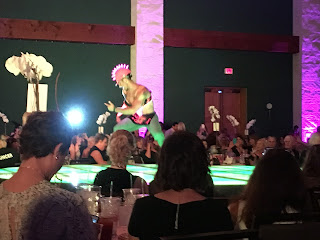 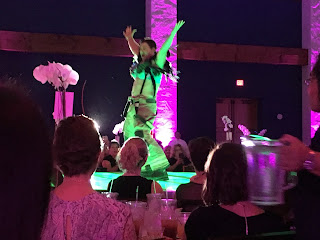 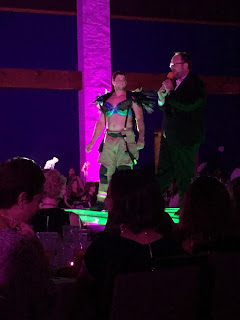 And here is the fireman, who wore mine. 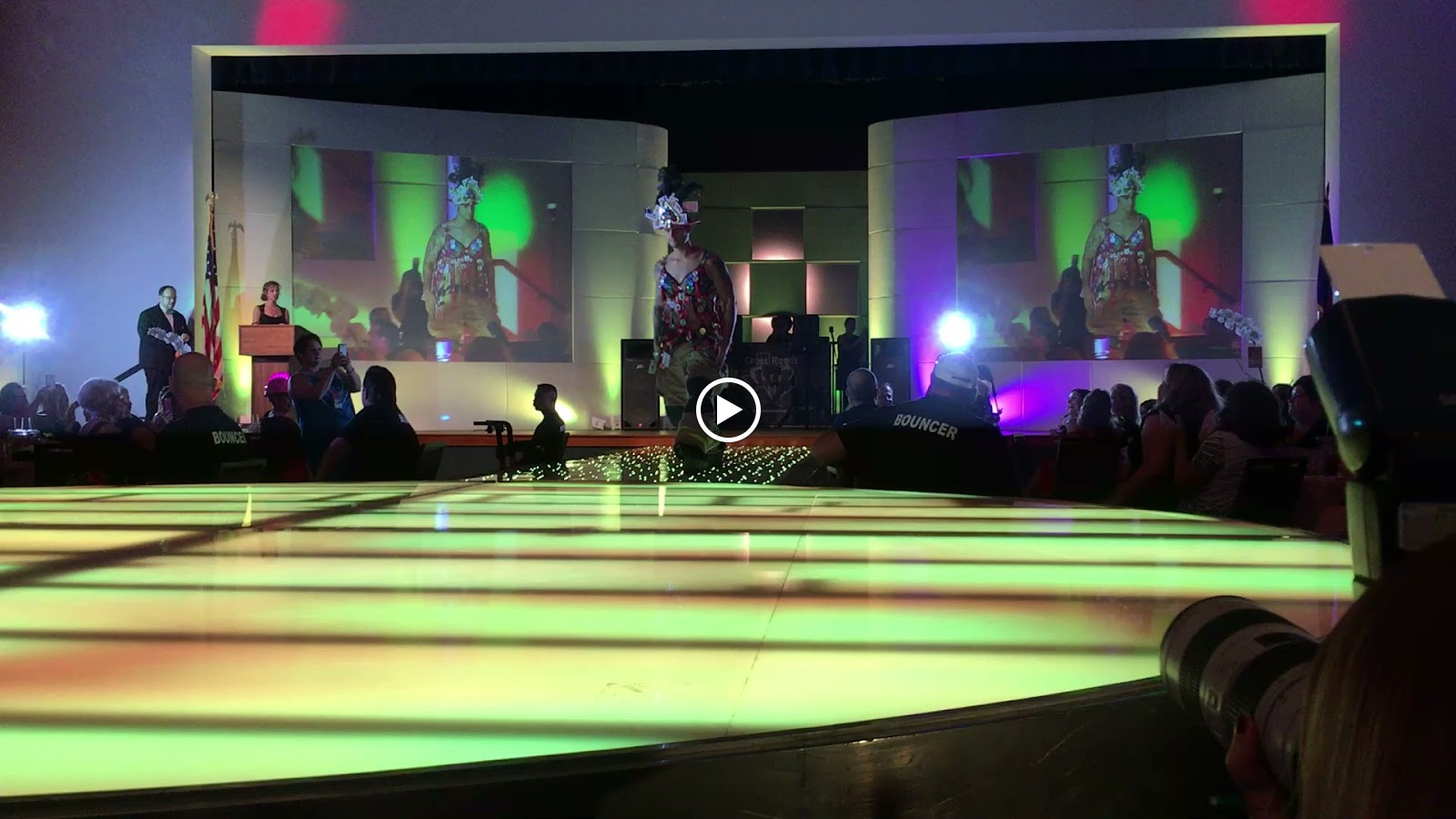 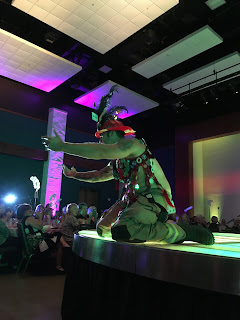 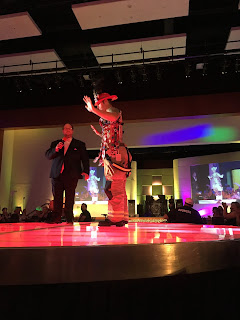 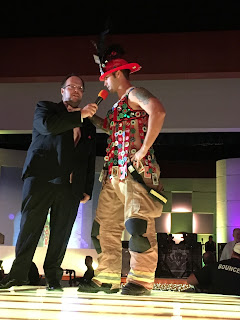 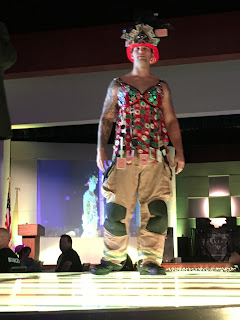 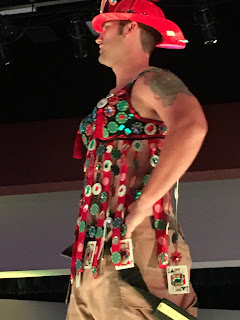 Here were some of the others. 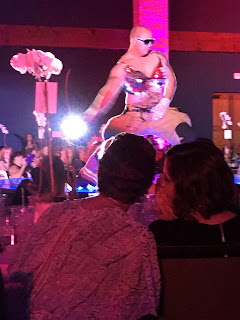 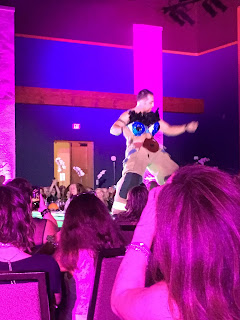 Getting dressed...... I imagine this was a strange experience for these guys. Not many men have experience wearing a bra. Or at least, a bra this heavy....;) 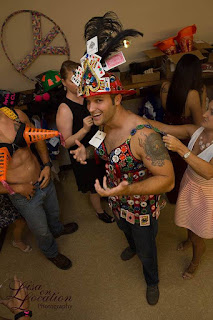 Thanks go to Selina Infante-Medina at Independence Title for sponsoring this bra. Thanks for Kendra Wray at KendraWray.com, for this opportunity. Thanks for the fireman Aaron Duval for modeling it. Thanks to Pink Heals Organization and for the Women's Council of Realtors to making this happen.